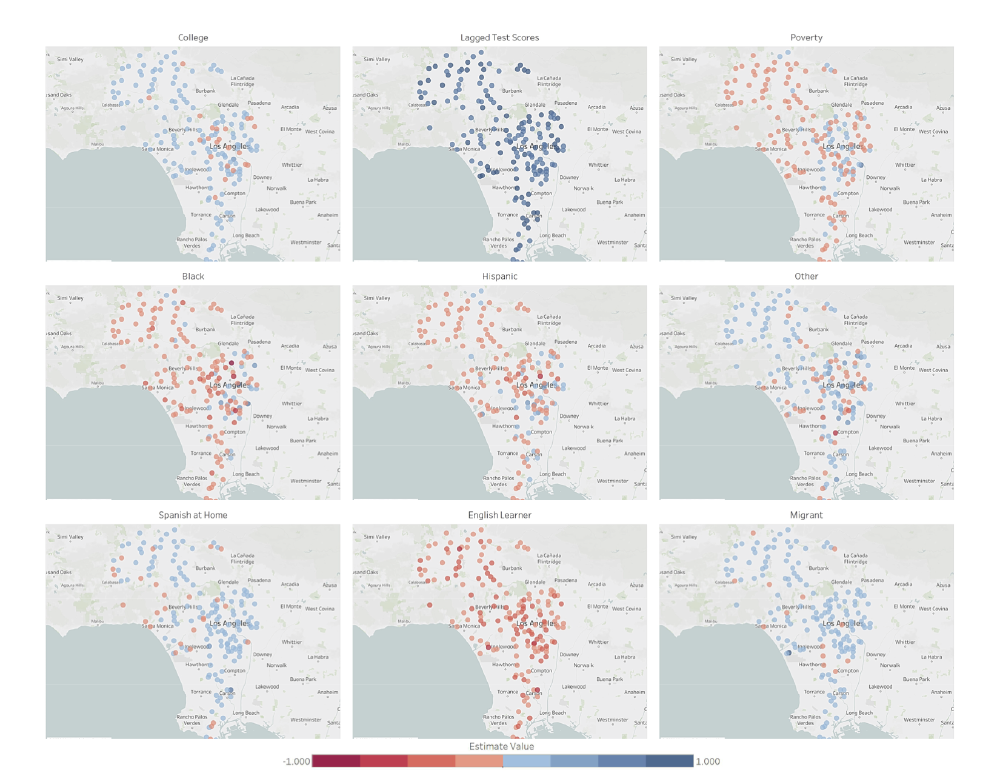 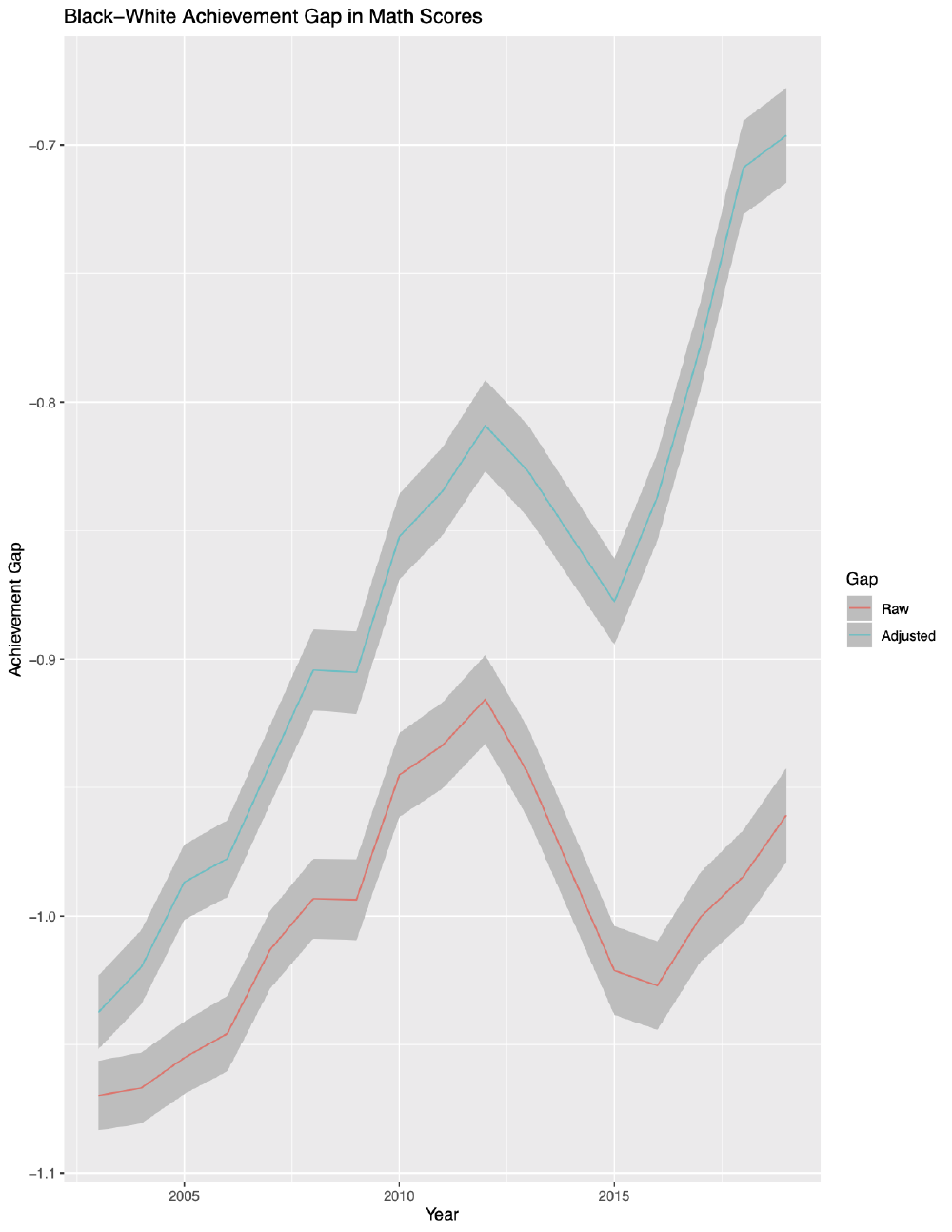 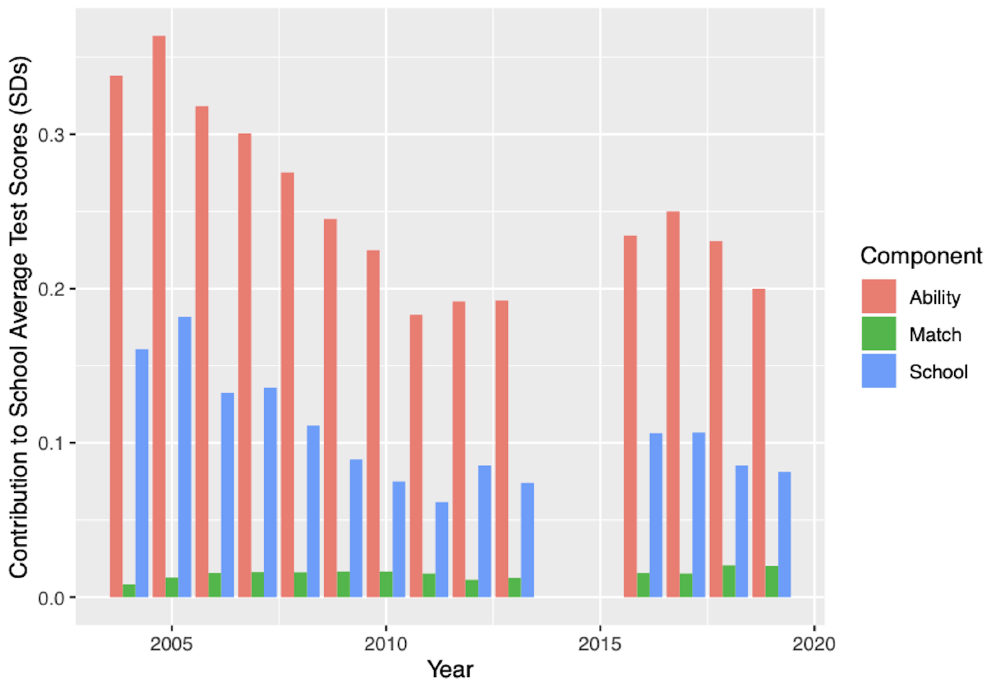 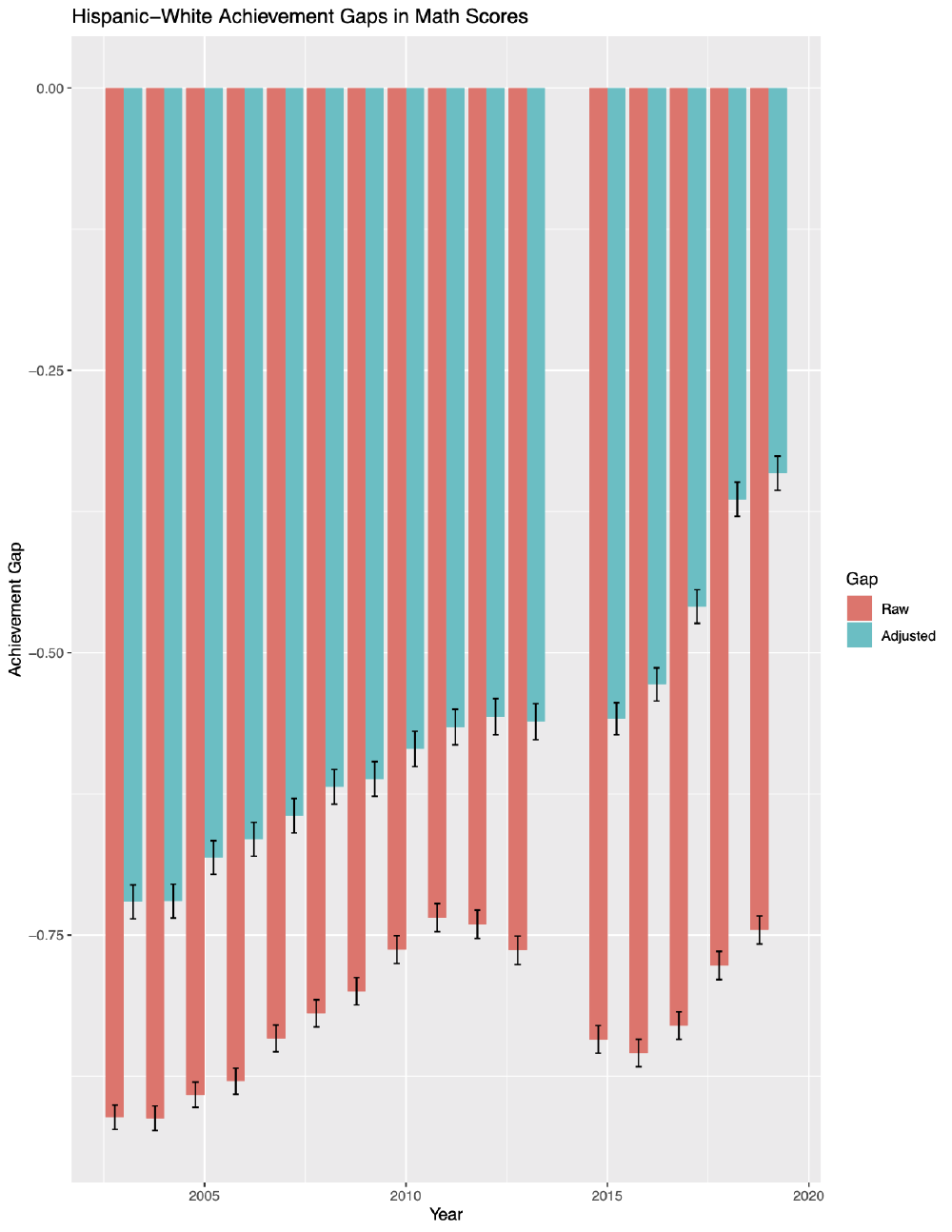 Educational Inequality in LA Unified School District and the LCFF

Schools often boast of their students’ achievements, but does this reflect well on the school itself, or only the students? After all, schools with more money or prestige can recruit high achieving students. So when the high test scores come in, does that reflect recruitment success or success on the parts of teachers and school administration?

With twenty years of data and over a million students’ demographics grades and test scores, student achievement can be decomposed into three components:

Everyone has a story of a particular teacher who for better or for worse, significantly changed the course of their academic career. If you had happened to be assigned geographically to a different high school, that new school wouldn’t have offered you the chance (or misfortune) of interacting with that particular teacher. This is what is meant by idiosyncratic match effects.

Suppose there are Jt schools in each time period t and It students for t= 1,…,T. We model potential outcomes of students as:

where αj is a school effect, Xi are student i's characteristics, and uij is a school-specific idiosyncratic factor. Note that this model allows for both vertical differentiation---through the αj-- and horizontal differentiation---through the βjT Xi term. Building on this model, we now proceed to decompose potential achievement into the three components discussed above. First, we define student ability Ai as the average of student i's potential outcome across all schools j
Ai = J-1 ∑ Yij = α + βT Xi + εi

With a notion of ability, we can express potential outcomes as

which depends on student ability, the average treatment effect of school j ATEj, and i-j match effect Mij. Ai captures how well a student does, on average, independent of the school they attend. ATEj captures how much school j improves its student's test scores above and beyond the average school in the district. Mij captures the prevalence of sorting but we are agnostic about its sign. If Mij is positive then students sort into schools that improve their outcomes relative to the average school e.g. some schools are particularly effective educating impoverished students.(A school j that met this criteria would have (βjPoor - βPoor )>0 indicating poor students will yield positive returns to attending school j compared to the average school.) With the decomposition of potential outcomes above, we can express school-level average outcomes as a function of the three components. Specifically, average test scores of school j is

It is important to emphasize that publicly available data on school achievement will report E[Yij | j(i) = j ] and implicitly combine the three components we defined. Therefore, some schools may appear to be high performing because they attract students with high average ability Qj but have low ATEj. A school with these characteristics would not improve the academic trajectory of its students, but appear to be high-performing due to the fact that the average student would do well regardless of the school they attended. Thus, when discussing within-district inequality we’ll refer to differences in the ATEj over time as opposed to differences in E[Yij | j(i) = j ].

Despite the LCFF’s aims, a report by Education Trust West found that although poorer districts received on average more funding, in some schools, inequality gaps have widened. Critics have also argued that basing the funding on average daily attendance (ADA) instead of total enrollment, disproportionately affects low-income communities, which were the orig- inal proposed targets of the funding. Others have raised concerns that the LCFF is a “dump truck” solution, i.e. money goes to the districts or schools without ensuring it benefits the specific students it intended to, as opposed to a “backpack” model, where the students whose attendance merits the funding also receive the proportional benefit.

Through our novel decomposition of student test scores, we find not only disparities in student outcomes between racial groups, but value added within-school differences as well. Furthermore, we find different results than the Education Trust West study in that the LCFF decreased inequality, and suggests an upward trend moving into 2019-2020. Despite finding substantial mismanagement of allocation and disbursal of the funds, we’re hopeful that the full effects of the funding for future reductions in inequality will be seen in years to come.