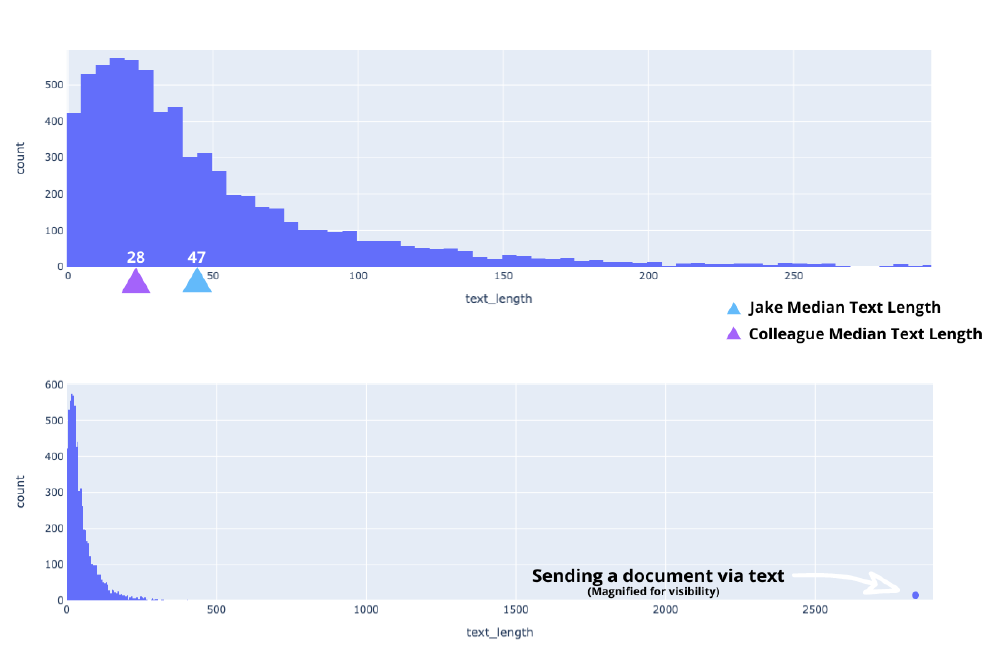 It was my colleague’s birthday, and since we had corresponded frequently regarding assignments and other project or meeting related issues, it would be fun to do a brief analysis of our text messages.

In iMessage there are several features to take into account that are not present in other more rudimentary messaging apps. The “tap back” feature of reacting to a message counts itself as a reaction. Therefore with knowledge of the specific language like “liked” or “emphasized” you can filter by tapback type. If you play an in-app game like “cup pong”, launching the instance will register as a message. If games are turn based, then you can have additional analysis (like how many games were played during meetings)

The total “messages” sent was 6836. But this metric would be better called “interactions” because of the many non-text items which are mentioned above.

The average message was 49 characters long (for reference, roughly the same number of characters in this bullet point that appear before this parenthetical). However, the data has a significant right skew, and the median is 33 characters. Some examples of 33 character length messages: - “I really like that color palette!” - “Omg it’s been 30 minutes only 😭😭😭” - “Get best model and print results?”

The longest message was a copy + pasted song lyrics from a parody song I wrote and performed at our graduation ceremony. It was 2890 characters long, so understandably skewed the data. The differences can be seen in figures 1 & 2 below.

Split by individual: From the feature “is_from_me” I could easily find the percent of messages sent by each person.

Games: 15 instances of “Cup Pong”, but I did not cross reference to find if any occurred during essential work duties. Anecdotal evidence suggests at least two occasions.

Tap-Backs: There were 112 instances of using the “HaHa” tapback.

As is evident from a brief sampling of messages, the data indicates that my colleague sends more frequent and shorter messages, but I send slightly less ferequent but more verbose messages. I tend to use more punctuation and parentheticals rather than splitting up messages. Many instances of “ha” were found, which indicates levity in the working relationship. Several games of Cup Pong were played, indicating my colleagues obsession with cup pong, and my acquiescence.